MIUI 12.5 was released together with the Mi 11. The new MIUI version will be released as an interim update after MIUI 12, but it has a list of new features and improvements. MIUI 12.5 is touted for improving privacy through transparency and controls that seem to be inspired by Apple’s iOS 14. Xiaomi’s custom skin also includes MIUI +, which allows users to integrate their smartphone with a Windows PC to view mobile notifications, apps, or even clipboard data right on their computer screen.

After the beta versions, Xiaomi has planned the first stable version of MIUI 12.5 for the end of April 2021. This version will initially be released in China for the Mi 11, Mi 10 Extreme Commemorative Edition, Mi 10 Pro and Mi 10, plans for other models and global markets will be announced at a later date.

According to Xiaomi, MIUI 12.5 uses up to 32 percent less memory in system operation and cuts power consumption by 17 percent. The new skin also optimizes memory usage in core scenarios by up to 20 percent. In addition, it is touted to optimize system apps and provide better graphics rendering via MIUI 12.

Similar to the new additions to Super Wallpapers, the latest MIUI update offers additional, nature-inspired sound effects with special tracks from the Amazon and the African jungle, as well as the arctic ice cream dessert. There are also improved haptic and notification sound effects to create a fresh feel. You’ll also notice stereo system sounds on compatible devices. In addition, MIUI 12.5 includes new motion effects architecture to provide an improved animation experience. The immersive touch is enhanced by the integration of a brand new tactile library.

Other information about the user interface is floating windows that allow you to quickly respond to a message or view maps without leaving your active screen. The MIUI update also includes a new “Ripples” animation for downloading apps and a “Burst” animation for uninstalling apps on the home screen. The MIUI 12.5 also offers a vertical layout for the “Recent” screen.

In terms of improved privacy, MIUI 12.5 offers the option of prompting you with a popup when an app tries to access your clipboard data. You can either grant or deny access. There is also an option to automatically deny access after a timeout. All of this sounds pretty similar to how iOS 14 provides notifications for data access on the clipboard. The MIUI 12.5 update also has the option to share the approximate location instead of the exact location with certain apps. Again something we saw on iOS 14. 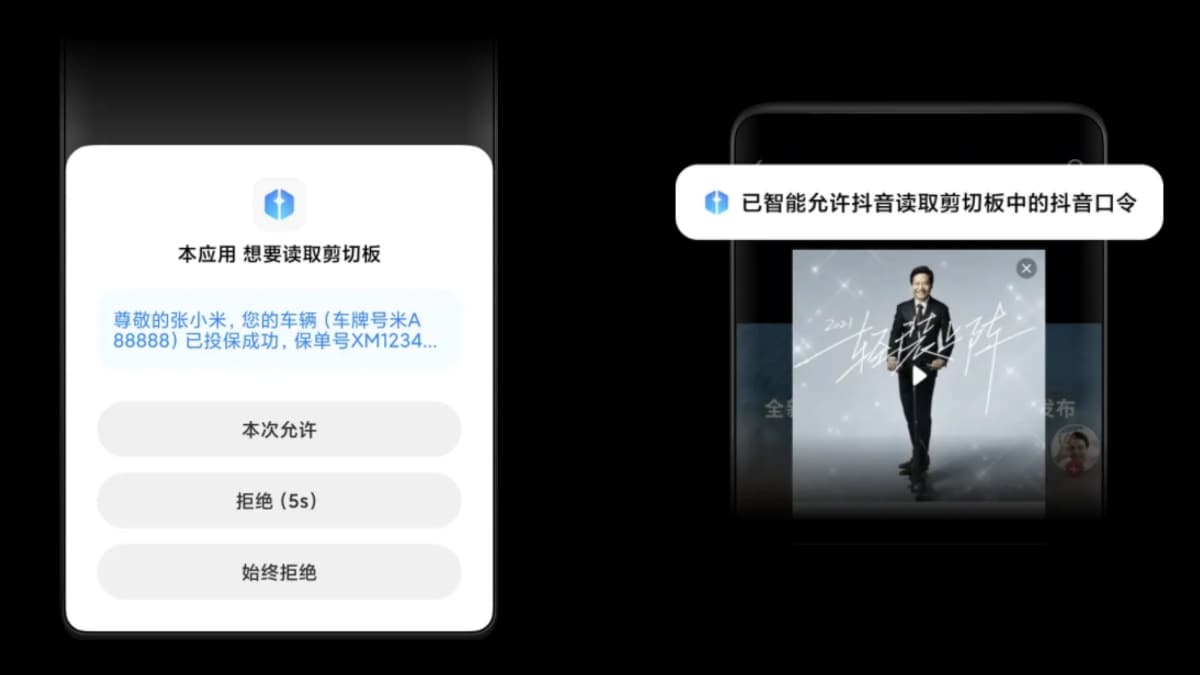 MIUI 12.5 will prompt you with a message when an app is accessing your clipboard data

MIUI 12.5 also offers sandbox support to isolate photo albums and private information from third parties. The new update also highlights website behavior records to give you details about the websites that could steal your data. And just like iOS 14, the Mi App Store on MIUI 12.5 also offers privacy details for every app listed.

Xiaomi has also brought updated Notes and Mi Browser to MIUI 12.5. There are also updates specifically for Xiaomi Health Services and Mi Cloud to provide an improved user experience. In addition, Xiaomi claims not to offer bloatware on MIUI 12.5, as it has fewer apps pre-installed than other custom ROMs.

MIUI 12.5 also includes MIUI + which works like Microsoft’s Your Phone app and allows you to integrate your Xiaomi phone with a Windows PC. Once integrated, you can view notifications, text messages, and photos from your phone right on your computer. You can also access your phone’s clipboard data and some apps on your computer screen.

MIUI + is initially available in beta and is limited to Mi 10 Extreme Commemorative Edition, Mi 10 Pro, Mi 10, Mi 9 Pro 5G, Mi 9, Redmi K30 Ultra, Redmi K20 Pro and Redmi K30 Pro. The phone must be running MIUI 12.5 to enable integration. Xiaomi recommends Mi Notebook Pro 15 Enhanced Edition, Pro 15.6-inch 2020 model, Redmi G Gaming Notebook, RedmiBook 16, RedmiBook 14 II and RedmiBook Air 13 as computers that can make optimal use of the new user interface. The company states that it would not guarantee the same experience with other notebooks due to driver and hardware limitations.

Is the Mi 10 an expensive OnePlus 8 or a budget budget S20 Ultra? We discussed this on Orbital, our weekly technology podcast, which you can subscribe to via Apple Podcasts or RSS, Download the episodeor just hit the play button below.