WhatsApp gained the most monthly active users in India in 2020: App Annie

WhatsApp became the top app of 2020 in India with the most monthly active users, according to App Annie, a mobile analytics company. That could change in 2021 as users move away from WhatsApp for privacy concerns. However, in a locked year 2020, WhatsApp was the focus. The instant messaging app also outperformed the leading social apps like Facebook and Instagram to grab users’ attention. Users spent an average of 21.3 hours per month.

However, Telegram, which competes heavily with WhatsApp, topped the table of the best social apps in the country. The Telegram has now reached 500 million monthly users and added 25 million new users within just three days of the WhatsApp controversy beginning.

Other apps, including YouTube and MX Player, also saw an increase in time spent in the country as people stayed indoors for months due to the coronavirus outbreak.

The details available App Annie’s State of Mobile 2021 report showed that the average monthly time spent per user on WhatsApp in India increased 23.87 percent from 17.2 hours to 21.3 hours in 2020. Facebook’s native app also saw a surge, gaining 17.1 hours of average monthly time per month in the country. Similarly, the time Truecaller spent in the country increased from 3.1 hours to 4.6 hours.

WhatsApp, Facebook, Truecaller, Facebook Messenger and Amazon were the five best apps in the country with the most monthly active users. 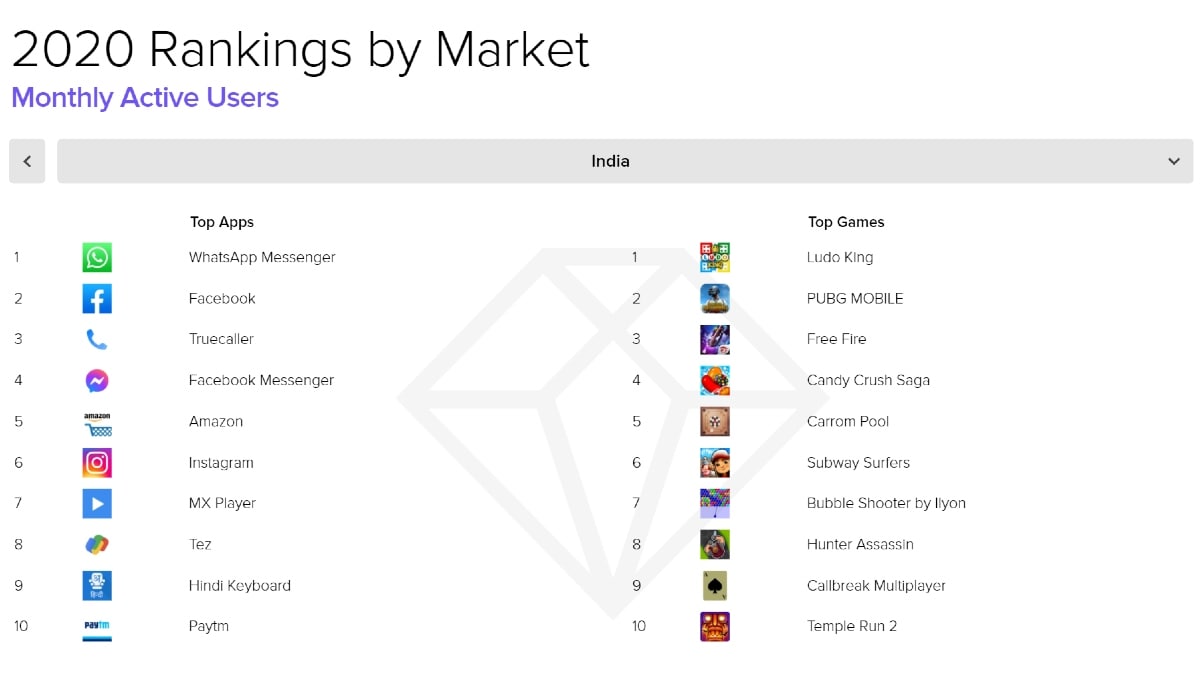 WhatsApp, Facebook and Truecaller were the top three apps in India in 2020 with the most monthly active users
Photo credit: App Annie

On the list of the top social media apps in terms of monthly active users, Telegram ranked first, followed by WhatsApp, Instagram, MX TakaTak, and Moj.

However, according to the report, Facebook, WhatsApp, Snack Video, Instagram and TikTok became the most downloaded apps in the country. Ilyon’s Ludo King, Carrom Pool, Hunter Assassin, Free Fire, and Bubble Shooter were the top five most downloaded games among Indian users.

When the government imposed a lockdown, a large number of cell phone users began to switch to video streaming apps. This trend was seen quite well in App Annie’s report, as the average monthly time spent on YouTube in the country was 26.4 hours per month. That was an increase of 21.4 hours in 2019. Apps like MX Player, Netflix, and Amazon Prime Video also saw an increase in time spent in the country.

App Annie also saw growth in mobile commerce apps in 2020. In India in particular, Flipkart got the best average time for mobile commerce apps, followed by Amazon, Olx, BigBasket and Ajio. One of the reasons could be the lockdown that led several Indians to shop for groceries online.

Not only have we been using apps longer – app spend also spiked in 2020 as Tinder, Disney + Hotstar, Google One, Truecaller, and Netflix became the leading apps attracting money from their users in India. Free Fire, PUBG Mobile, Coin Master, Teen Patti, and Clash of Clans, on the other hand, were the top consumer spending in the country.

The report also highlighted that over 24.27 billion mobile apps were downloaded from app stores in 2020, including Apple’s App Store and Google Play. This corresponds to 11.13 percent of the 218 billion app downloads reported worldwide.

Related Posts of "WhatsApp gained the most monthly active users in India in 2020: App Annie"